I did it! I finally did it. I decided to pay the $100. Now I’m a proud owner of Game Maker Studio and I feel awesome. And also ready to make a game. For now, I’m going to call this game Fight the Darkness, because until something novel comes along, it’s the title that I have stuck in my head and I can’t get anything else to stick. The idea for this game has been stewing in my head for about three weeks. It all started after I had a strange dream about a labyrinth rendered in Pokemon Gold/Silver style graphics, and about some students trying to outrun a multi-eyed demonic spaghetti noodle.

Levels are comprised of hallways and rooms, shrouded in black. At the start of each level, the four characters spawn in random areas, and a timer begins to count down. Each character has a radius of light around them, revealing area as the player moves them. 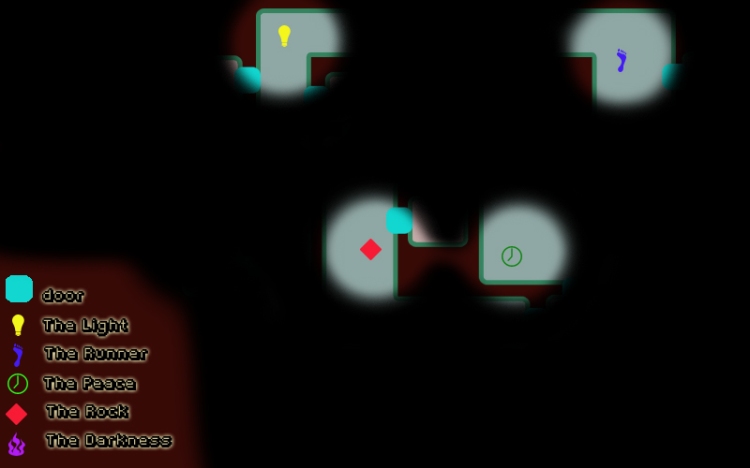 The player can toggle between characters to move them appropriately. It is advantageous for the player to discover as much as the map as they can, because revealing more rooms gives the player more places to store their characters when the Darkness appears, and more opportunities to find the Darkness. 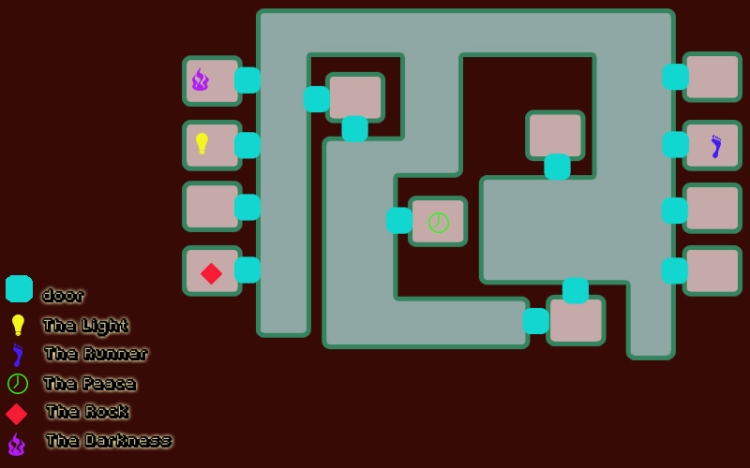 When discovered, rooms display two very important types of information: a fraction and a glyph. The fraction represents how many people can fit into a room at a time. For example, a room bearing 0/1 can fit one person at a time, 0/2 two people, etc. The glyph represents the likelihood the Darkness will appear in a room. Ten glyphs represent the likelihood the Darkness will appear in a room, but it will be up to the player to pay attention to environmental hints as to what chance each glyph represents. How those environmental hints will manifest I’m not sure of yet, but it is something that I am currently mulling over.

Creating this game will be a challenge for me, especially since I have only produced games in groups, but I believe it is necessary to my advancement as a game designer. If the game becomes refined enough and I believe it has a decent amount of “fun” to it, I might consider submitting it to Steam, or the Google Play store.

Game development is a journey, and like all sojourns, it is best shared. I welcome comments and input about my projects, or if you have a Game Maker resource you’d like to share with me, by all means send me a link to it! I appreciate everyone who has been reading this blog, and I hope you all look forward to future posts about Fight the Darkness and other projects of mine. Till next time, USCF signing out.